Is shockwave right for you?

Do you have a 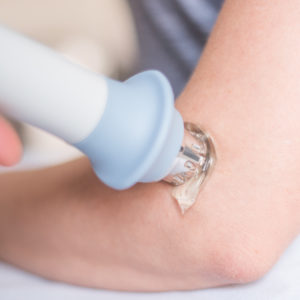 nagging injury that just doesn’t seem to go away? Do you get it under control only to be disappointed when weeks later it rears its head? You may be a candidate for a relatively new technology called extracorporeal shockwave therapy (ESWT). Combined with manual therapy and an exercise program we have had success in resolving many long-standing injuries with the addition of shockwave.

Stacy, a 67-year-old client who came to see me as a ‘last resort’ for treatment of her heel pain, caused by plantar fasciitis that had been interfering with her daily life for over two years. She had tried many treatment options before coming to see us at Optimal Health. After the assessment, it was clear to me that Stacy would benefit from a treatment approach that included shockwave therapy.

Stacy’s response to me was “you are going to shock me? Is it going to hurt?”

This is a fair response to the idea of being shocked. So, let me explain shockwave therapy.
Shockwaves are high energy sound waves generated by a machine that travel through tissue to stimulate healing. First used as a treatment for kidney stones, the same technology has been customized to be used to treat a chronic tendon injury such as calcifications, tendinopathy and tears.
Once the shockwave reaches the tissue it stimulates the bodies tissue repair response including:
promoting inflammation to help re-start the healing process
Breaking up calcifications in the tissue
Decreasing the pain response

In Stacy’s case, the shockwave restarted the inflammation process leading to the good army of cells coming in, cleaning up and laying down new healthy tissue.
After five sessions Stacy reported no discomfort in the morning or after periods of time sitting and we were working at increasing her walking distance.

In another case a client named Bill came to see me this past winter early in the cross-country ski season. He eagerly awaited our first snow fall and was very excited to get up to Kawartha Nordic to ski every chance he could. Unfortunately, this lead to an Achilles tendon overuse injury (too much too quickly). I saw Bill approximately six weeks after his symptoms started and we determined shockwave would be an appropriate option. After four treatments including shockwave at one week intervals Bill could start cross country skiing again. The shockwave likely provided the body with a boost in the healing process and laying down new tissue (collagen).

As a clinician, I have found the shockwave therapy to be a treatment game changer for a wide range of conditions including rotator cuff calcifications, partial tears, tennis elbow, Achilles tendinopathy, plantar fasciitis as well as hamstring strains and even long standing muscle tension.

Are you ready to jump on the ‘shockwave’ ?!